Back to Powys Society Articles

Transcribed from a photocopy of a leaflet publicising the lecture series. The contents have been transcribed because the source photocopy was too blurred to be reproduced as facsimile pdf. 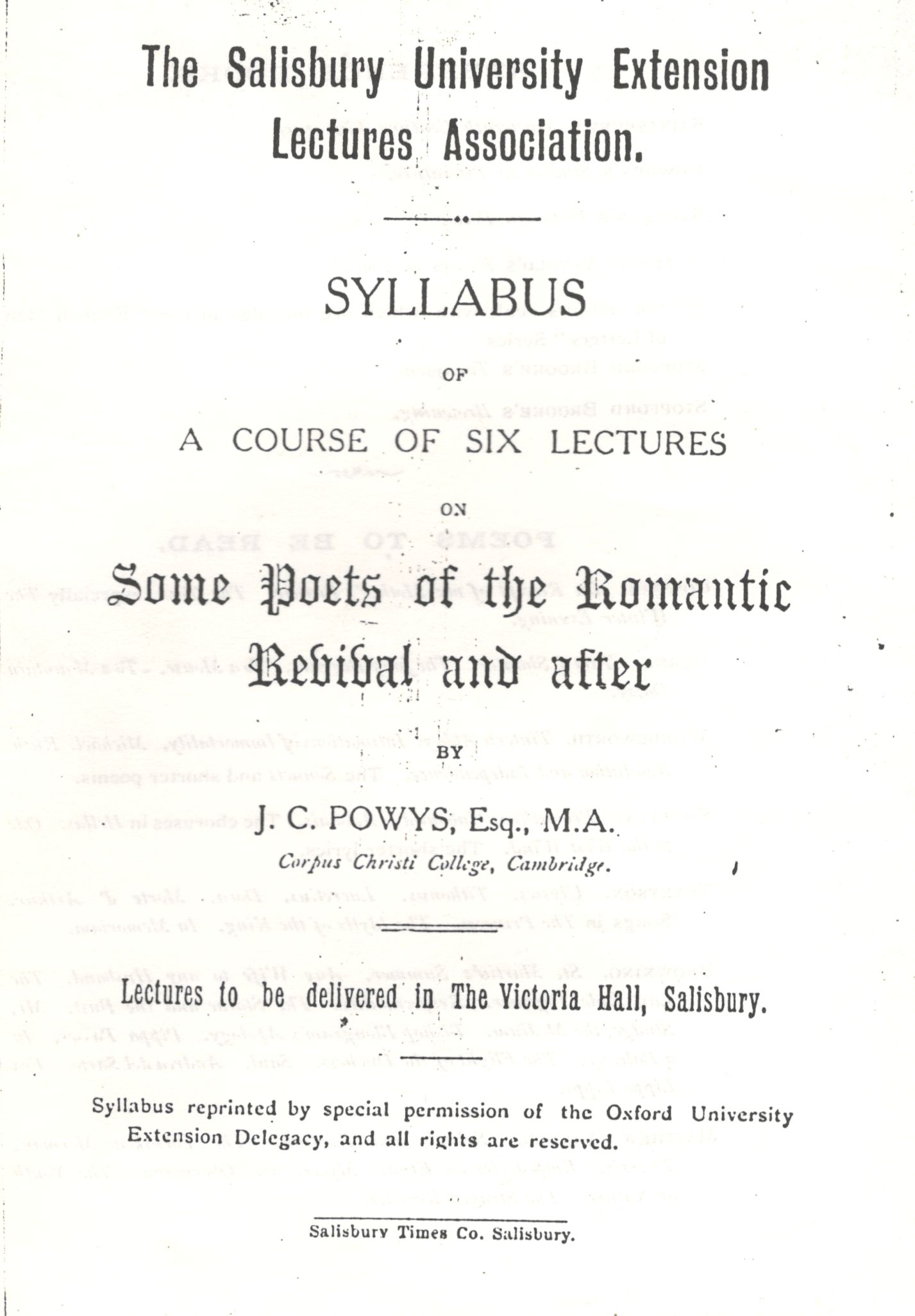 SYLLABUS OF A COURSE OF SIX LECTURES

Some Poets of the Romantic Revival and after

Lectures to be delivered in The Victoria Hall, Salisbury.

Syllabus reprinted by special permission of the Oxford University Extension Delegacy,
and all rights are reserved.

POEMS TO BE READ

The Romantic Revival. Its meaning and significance in thought and literature. How far constructive, how far destructive. Its glory and its danger. Its chief characteristics — daring, imagination, mysticism, realism, devotion to nature, self-assertion. Its individualistic as opposed to conventional tendencies. Its passion for the Beautiful and the Grotesque. Rousseau. The French Revolution.

Cowper. His unique place in English literature. His tragic suffering. The originality of his work at his best—where it anticipates the new tendency. Religion, Nature, and Sentiment. On Receipt of my Mother's Picture. The Castaway. The Task. Cowper’s Miltonic experiments. Successful in sonnet writing, less so in blank verse. The curious admixture in his work of playful humour and fanciful poetry. His sallies of fine wit. His refined tenderness. His indoor pictures of domestic intimacy. His satires—wanting in the mordant pungency of Pope’s and Swift’s. Their religious earnestness. His view of God as extramundane contrasted with Wordsworth’s idea of Him as immanent.

Burns. Like all the greatest products in Art the poetry of Burns is deep-rooted in popular tradition. Scotch ballads and folk-lore had for generations been accumulating. To much evasive and fragmentary material he gave complete form; for snatches of old tunes he found passionate words. His tenderness towards animals, flowers, and children. His pity for all outcast and abhorred people —‘ even for the devil.’ His immense sympathy with man as man. His occasional coarseness and outbursts of Rabelaisean humour. He has no fastidiousness. All forms of life sacred to him. The rushing melody of his lyrics. His perfervid impulse towards love. His narrative and semi-dramatic poems — Tam o’ Shanter, The Jolly Beggars. His attacks on hypocrisy — Holy Willie's Prayer.

The poetry of Wordsworth constitutes a literary and philosophical revolution. His poetic theories. The language: prose and poetry not different. Emotion remembered in tranquility. The proper subject of poetry the elemental passions and affections of man. These found most easily in the country. ‘Wordsworth’s eyes avert their ken from half of human fate.’ His doctrines of the moral and spiritual value of the senses. Through the senses we apprehend the inner life of Nature. He is concerned with the immemorial usages and consecrated traditions that link man’s life to the larger life about him. His pantheistic conception of God. He endows the very stones and grass with an obscure form of spiritual being. His manner of treating humanity. He sympathizes with old men and women; with mothers in their love for their children; with all the tragic affections and passions of simple people deepened by the grandeur of Nature about them. He deals less with the exciting and rare moments of life than with that common fund of natural pleasure which all that live enjoy. He is the poet of those vague associations of joy and sorrow which grow like moss or lichen round the material objects which surround us, making them mysterious participators in our human life. His style, sometimes bald sometimes childish, sometimes ponderous and dignified, is at its best the very essence of poetry.

Shelley’s unique temperament. The beauty and weakness of it as groundwork for poetry. The most ethereal of all poets — made of purer, finer clay than the rest. His very faults have a radiance that other men’s virtues lack. Like Ariel, he seems ever about to resolve himself into the elements from which he has been taken. His passion for fire, air, and water. His revolt against the authority and traditions of the world, a revolt of innocence against the dubious admixture of good and evil in human affairs. He believes in the coming of the golden age, only withheld from appearing to us immediately by the oppressions of men. Christian in his devotion to the cause of the poor and the weak, he attacks Christianity as associated with the tyrannies of modern life. He writes best of the most ethereal and intangible aspects of Nature—of dew and frost and rain, of wind and sky, of sunlight and moonlight, of clouds and vapours, of rivers and the sea. Flowers of the most transparent beauty appeal to him—as anemones, narcissi, and white violets. He is sensitive not only to exquisitely beautiful things but to weird and ghastly things. His allusions to ‘white Death’. His system of Philosophy might be called Pantheism, but Matter with Shelley is so refined and evasive an essence that it escapes analysis. Such as it is, Love is its motive force and magnet. He writes of spirits and genii and faint aerial existences whose fragile forms dissolve as you grasp them. His relegation of the interest of his verse to such non- human regions begets a curious melancholy. His songs seem full of the sighing of the leaves, the sobbing of the sea, the wailing of the wind. He feels pity for ail the innocent creatures that have unjustly suffered since the beginning of the world.

The poetry of the Victorian Age, how different from that of the beginning of the century. Influence of Science upon poetry for good and for evil. Classicism and Romanticism: the two poetic paths; how blent in Tennyson. Tennyson’s attitude towards Religion.Hie has no consecutive philosophical system. His acceptance of the main doctrines of Evolution. His scientific accuracy of description. Tennyson’s want of enthusiasm. His political opinions. His innate Conservatism and affection for old Institutions and Customs. His English prejudices. An insular Poet. His contempt for ‘the blind hysterics of the Celt’. His stately pictures of English country houses, gardens, and parks. The Ethics of Tennyson. His noble yet conventional rendering of popular ideals. The element of ruggedness, of austerity, of discord itself, which seems necessary to the creation of the grandest Harmonies, absent from Tennyson’s work. What he possesses in place of the resistless flood of inspiration of the earlier Romantic poets. He is an artist. The poet of inherited traditions. His use of other poets: of the poetry of Greece and Rome. His felicity of phrase and intricate elaboration of simple thoughts. Tennyson’s treatment of Nature. He treats her in a material way, watching her colours and noting her forms, but giving her no soul. The higher Pantheism is with him merely an intellectual theory, one among others, not a prevailing innspiration. His landscapes broader than-those of Keats. His fondness for flat meadows, slow flowing rivers, ‘soughing reeds’, large horizons. His hard work and freedom from carelessness. Tennyson compared with Byron in this respect. His genius for half-wistful fantasy. The melody of his verse; its halting cadences.

Browning’s analytical genius. His power of interpreting the motives of men. His preference for the inconsistencies and paradoxes of human nature above every other subject. He is a dramatic poet in an age singularly deficient in drama. He represents a reaction away from the Idyllic mood of Tennyson and the subjective mood of the earlier Romantic poets towards the sixteenth and seventeenth century. He has more in common with Donne than with any of his contemporaries. But he is the most original of poets. His interest in painting, sculpture, and music.

Since Chaucer was alive and hale,
No man has walkt along our roads with step
So active, so inquiring eye, or tongue
So varied in discourse.

His love of odd out-of-the-way characters, the drift and flotsam of life. His sympathetic interest in charlatans, imposters, worldlings, Bohemians, notorious criminals, free- thinking clergymen, light women, madmen, murderers, &c. His genius for finding the great hidden in the little, the beautiful in the ugly, His love of the grotesque. His love of discovering the clay intermixed with fine characters. His realism. He plunges into the actual — works his way through the world’s medley, looks round upon the carnival and revels in it. He throws a sort of drag-net for the ‘debris’ of life. His dramatic poems. His management of momentous situations and tragic episodes. His use of animals, plants, minerals, professional and artificial appliances, musical technicalities, wood-rubble, shells and sea-weed, furniture, curios, bric-a-brac and all sorts of heterogenous objects, to give colour, reality, and interest to bis scenes. His robustious animal spirits and self-assertive defiance of the rules of ‘good taste’. His coarseness compared with the earthiness of Burns and the ‘diablerie’ of Byron.

The Optimism of Browning. What it amounts to as a philosophical theory, and what it implies in his temperament. Criticism of Browning's optimism. Where it appears unsatisfactory compared with that of (1) Wordsworth, (2) Walt Whitman, (3) George Meredith.

He represents a reaction in favour of Christianity as against scientific fatalism.

His love poems have the warmth and sincerity without the romance and beauty of those of Burns and Shelley, but they display greater insight into the accompanying mental conditions.

The style of Browning. Its eccentricity and obscurity partly the result of crowding many thoughts together, partly of his use of metaphor and image, and partly his rush of animal spirits, but most of all his want of the sense of classic beauty. His obscurity, as well as the originality of his rhymes, is part of his method, not an accident. Like Balzac, he has a passion for endowing with a kind of secondary life the material environment of his characters.

Arnold's position as a poet not yet so high as he deserves in popular estimation. Reasons for this. His philosophical opinions. His attitude towards contemporary life. He feels himself standing between the old world and the new, between the living and the dead. His sorrow at the loss of the Old Faith (stanzas from the Grande Chartreuse). He seems to discern only faint foreshadowings of what the new will do (Obermann). Unsatisfied with mere scientific doubt he falls bank in ‘sad lucidity of soul ’ upon a Pantheistic Stoicism. Nature to him seems ‘rather to bear than to rejoice.’ At any rate he is ‘prepared’, whether Earth ‘rocking her obscure body to and fro’ knows not her own offspring or whether she and her children alike spring from the Mind of ‘One all-pure’, to endure what Fate shall send. He is a Pantheist—

All things the world which fill
Are but of one stuff spun,
That we who rail are still
With what we rail at, one.

His masters in this pantheistic doctrine — the Greek Philosophers, Spinoza, Goethe, and Wordsworth. His continual insisting upon the value of passive contemplation, of possessing the soul in peace, unruffled by storms of Passion, unspoiled by the World. His preference for the Deity revealed in Nature, and ‘The stream of tendency that makes for Righteousness’ above a more human god. He separates Man from Nature and regards the latter as pure, law-abiding, and eternal, the former as rebellious and transitory. (The Youth of Man, Self Dependence, A Summer Night). His feelings of an inevitable sadness, a ‘sense of tears in mortal things’, a ‘something that infects the world,’ a ‘majesty of grief’ which is an essential part of earthly life. His style as a poet. His classic purity and self-restraint. His spontaneity and severe charm make him free from the Corinthian peril of Tennyson’s art. His feeling for Nature has something of the romantic sense, some thing of the magic he praises in the Celt. But he has more of the direct grasp of the Greeks. His feeling for the larger and more primitive aspects of Nature; for great rivers and the sea. His Miltonic instinct for the suggestiveness of strange foreign names. His epic power. Sohrab and Rustum. His Homeric metaphors and large, simple style of description. His unrhymed metres, their music and discords.