‘A genius – a fearless writer, who writes with reckless passion.’ — Margaret Drabble

‘The one author I could not live without is John Cowper Powys.’ — Bernard Cornwell

‘Powys evoked the English landscape with an almost sexual intensity. Hardy comes to mind, but a Hardy drunk and feverish with mystical exuberance.’ — Philip Pullman 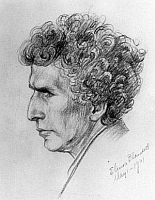 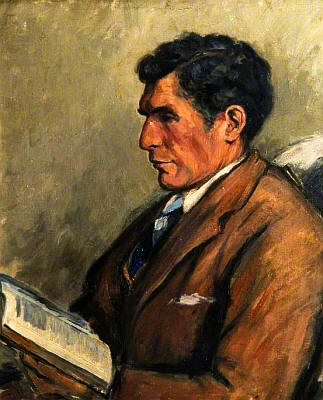 John Cowper Powys was a prolific novelist, essayist, letter writer, poet and philosopher, and a writer of enormous scope, complexity, profundity and humour. A powerful orator, he spent over thirty years as an itinerant lecturer in the United States, during which time he wrote his first four novels. In 1930 he retired to upstate New York and turned to full-time writing: it was here that he produced such masterpieces as his Autobiography, A Glastonbury Romance and Weymouth Sands. He returned to Great Britain in 1934, settling in North Wales in 1935, where he wrote the historical novels Owen Glendower and Porius, the critical studies of Rabelais and Dostoevsky, and The Brazen Head and other inventive fantasies. Other notable novels are Wolf Solent and Maiden Castle: all of them are rich in characterisation, psychological analysis and evocation of place. The Pleasures of Literature demonstrates the breadth of his literary interests, The Meaning of Culture and In Defence of Sensuality the immediacy of his thought.

Six Major Novels and an Autobiography

The first of the great novels of John Cowper Powys, Wolf Solent caused quite a stir when it debuted in 1929, garnering praise from many of the top writers of the day including Conrad Aiken and Theodore Dreiser. Wolf Solent has been frequently republished in Britain and America, notably in paperback by Penguin in Britain.

‘Often described as one of the greatest English novels of the twentieth century, John Cowper Powys’s epic Wolf Solent centres around the story of a young man returning to his roots in the West Country after ten years in London. Compelling, romantic and sensuous, it is peopled with memorable characters and filled with vivid, primitive descriptions of landscape. But beyond this powerful evocation of people and place, Wolf Solent is also a meditation on life and death, good and evil, body and soul, combining the earthy and everyday with the spiritual’. — Penguin Classics cover

‘The novel is a momentous piece of work . . . of transcendent interest and great beauty’. — The New York Times

‘At the striking of noon on a certain Fifth of March, there occurred within a causal radius of Brandon railway-station and yet beyond the deepest pools of emptiness between the uttermost stellar systems one of those infinitesimal ripples in the creative silence of the First Cause which always occur when an exceptional stir of heightened consciousness agitates any living organism in this astronomical universe. Something passed at that moment, a wave, a motion, a vibration, too tenuous to be called magnetic, too subliminal to be called spiritual, between the soul of a particular human being who was emerging from a third-class carriage of the twelve-nineteen train from London and the divine-diabolic soul of the First Cause of all life.’

John Cowper Powys has been acclaimed by some of the greatest minds of the past century, from Henry Miller (‘my first living idol’) to George Steiner (‘supreme in English fiction after Hardy’) to Robertson Davies (‘a great writer’). A Glastonbury Romance, first published in 1932, is regarded by many as his masterwork, an epic novel of terrific cumulative force and lyrical intensity. In it, he probes the mystical and spiritual ethos of the small English town of Glastonbury, and the effect upon its inhabitants of a mythical tradition from the remotest past of human history — the legend of the Grail. Powys's rich iconography interweaves the ancient with the modern, the historical with the legendary, and the imaginative within man with the natural world outside him to create a book of astonishing scope and beauty.

‘A truly extraordinary novel. It stands out indeed in a most astonishing way from the great mass of present-day fiction: a very earthquake of a book, bewildering, if you like, shocking, even infuriating, yet incontestably great.... It is a big book, an important book.’ — The Times

‘The only novel produced by an English writer that can fairly be compared with the fictions of Tolstoy and Dostoyevski.’ — George Steiner, The New Yorker

‘The book of the century.’ — Margaret Drabble, The Telegraph.

‘John Cowper Powys is a writer who changes how you see the world.’ — Michael Henderson, The Telegraph

Powys tells the story of Jobber Skald — a large, somewhat brutish man, obsessed with the urge to kill the local magnate of the town because of the man's contempt for the workers of the local quarry — and his redeeming love for Perdita Wane, a young girl from the Channel Islands. Weymouth Sands boasts a striking collection of human oddities including a famous clown, his mad brother, a naive Latin teacher, a young philosopher, and an abortionist.

‘It brings to mind the ... the romantic ferment of the film 'Les Enfants du Paradis' or ... one of the works of J.M.W. Turner.’ — The Observer

At the centre of the novel is the aptly named Dud No-man, a historical novelist widowed after a yearlong unconsummated marriage to a woman who continues to haunt him. Inspired by pity and his own deep loneliness, Dud takes Wizzie Ravelston, an itinerant circus performer, into his home and heart. Their awkward yet endearing efforts to create a life together unfold in counterpoint to the romantic and familial relationships that sizzle and simmer in the county town of Dorchester. Yet even as the characters in Maiden Castle struggle with the perplexities of love, desire and faith — readjusting their sights and affections — it is the looming fortress of Maiden Castle that exerts the otherworldly force that irrevocably determines the course of their lives.

It is the year 1400, and Wales is on the brink of a bloody revolt. At a market fair on the banks of the River Dee, a mad rebel priest and his beautiful companion are condemned to be burned at the stake. To their rescue rides the unlikely figure of Rhisiart, a young Oxford scholar, whose fate will be entangled with that of Owen Glendower, the last true Prince of Wales — a man called, at times against his will, to fulfill the prophesied role of national redeemer. Psychologically complex, sensuous in its language, vivid in its evocation of a period shrouded by myth, ‘Owen Glendower’ tells a compelling story of war, love, and magic.

“Porius stood upon the low square tower above the Southern Gate of Mynydd-y-Gaer, and looked down on the wide stretching valley below.” So begins one of the most unique novels of twentieth-century literature, by one of its most ‘extraordinary, neglected geniuses,’ said Robertson Davies of John Cowper Powys.

Powys thought Porius his masterpiece, but because of the paper shortage after World War II and the novel's lengthiness, he could not find a publisher for it. Only after he cut one-third from it was it accepted. The 2007 edition Porius: a Novel (Overlook, 2007) (also avaiable on Kindle) not only brings Porius back into print, but makes the complete full-length book available to readers for the first time in the form Powys intended.

Set in the geographic confines of Powys's own homeland of Northern Wales, Porius takes place in the course of a mere eight October days in 499 A.D., when King Arthur — a key character in the novel, along with Myrddin Wyllt, or Merlin — was attempting to persuade the people of Britain to repel the barbaric Saxon invaders. Porius, the only child of Prince Einion of Edeyrnion, is the main character who is sent on a journey that is both historical melodrama and satirical allegory.

A complex novel, Porius is a mixture of mystery and philosophy on a huge narrative scale, as if Nabokov or Pynchon tried to compress Dostoevsky into a Ulyssean mold. Writing in The New Yorker, George Steiner has said of the abridged Porius that it “combines [a] Shakespearean-epic sweep of historicity with a Jamesian finesse of psychological detail and acuity. Faulkner's Absalom, Absalom!, which I believe to be the American masterpiece after Melville, is a smaller thing by comparison.”

This new, and first complete, edition of the novel substantiates both Steiner's judgement and Powys's claim for Porius as his masterpiece.

‘This mythical masterpiece ... There is comedy, Miltonic sublimity, chaos and confusion in equal measure ... fit to be compared both for ambition and achievement with Ulysses.’ — Times Literary Supplement

Published in 1934 following Weymouth Sands, Autobiography is a vital and uninhibited self-portrait by one of the major literary figures of the twentieth century. With unparalleled wit, candour, and lyricism, Powys, at the age of sixty, set out to chronicle his life. He wrote: ‘I have tried to write my life as if I were confessing to a priest, a philosopher, and a wise old woman. I have tried to write it as if I were going to be executed when it was finished. I have tried to write it as if I were both God and the Devil’. Autobiography conveys Powys's contagious excitement of his discovery of books and men and his unceasing discovery of himself, as well as fascinating reminiscences of the remarkable journeys, both geographic and intellectual, of his life. His Autobiography is a work that stands alone in autobiographical literature and is the one of the most admired of his books.

‘I touch here upon what is to me one of the profoundest philosophical mysteries: I mean the power of the individual mind to create its own world, not in complete independence of what is called “the objective world,” but in a steadily growing independence of the attitudes of the minds toward this world. For what people call the objective world is really a most fluid, flexible, malleable thing. It is like the wine of the Priestess Bacbuc in Rabelais. It tastes differently; it is a different cosmos, to every man, woman, and child. To analyse this “objective world” is all very well, as long as you don't forget that the power to rebuild it by emphasis and rejection is synonymous with your being alive.’ P.62

‘What I really feel is a sickening pity for every sentient thing, victimized, as we all are, by the great sadist who created this world’. P.455

‘Our unfortunate human nature has never been subjected to conditions quite so anti-pathetic to all the most interesting stimuli to poetic human feeling since the beginning of the world, as it has been subjected to in America’. P. 494-5

‘I consider how my deepest impulses are neither exactly sadistic nor masochistic or mystical or theatrical or quite sane or quite mad, that there ought to be coined a completely new formula for what I am; and perhaps this is true for every separate living soul.’ P.604

‘What we do is important; but it is less important than what we feel; for it is our feeling alone that is under the control of our will. In action we may be weak and clumsy blunderers, or on the other hand sometimes incompetent and sometimes competent. All this is largely beyond our control. What is not beyond our control is our feeling about it.’ P.626

‘One of greatest 20th-century English novelists, John Cowper Powys is also the author of one of the greatest autobiographies ever written. Re-creating the lost worlds of late Victorian Dorset and early 20th-century America where he lived and worked, this mesmerisingly strange book shows Powys to be a kind of magical shape-shifter, eluding the reader — and perhaps himself — even as he engages the most reckless self-revelation. Read this Autobiography — you will never forget it.’   — John Gray, author of The Soul of the Marionette

See our publications page for titles we sell.