PROTEUS AND THE MAGICIAN

The Letters of Henry Miller and John Cowper Powys, edited by Jacqueline Peltier

This volume brings together in one place, for the first time in English, the correspondence between these two great writers who both had such a profound influence on each other.

PROTEUS AND THE MAGICIAN includes an introduction, by Jacqueline Peltier, notes, bibliography, index, photos and reproductions of original letters and dedications. 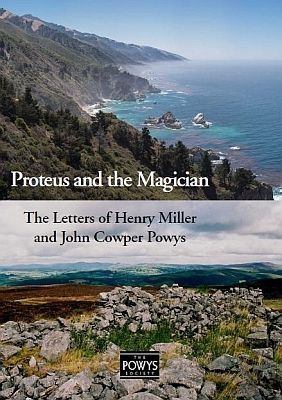 When a young American, ‘a kid from Brooklyn’, enraptured by the world of words and books hears an English writer, the future author of Wolf Solent, A Glastonbury Romance and Autobiography, delivering unforgettable public lectures to all kinds of audiences throughout America, we may well imagine the powerful impact it had on a gifted young man, obsessed with the ambition to be a writer. This is exactly what happened to Henry Miller. Some time in the 1920s, after having listened to John Cowper Powys lecturing at the Labor Temple in New York, elated and fascinated, he wished to celebrate the great achievement of the writer he admired so much: that was when Powys entered the pantheon of Henry Miller's literary masters. Some thirty years later, Henry Miller, busy writing what would become The Books in My Life remembered the emotion he had felt while listening to Powys's lectures and suddenly decided to write to him. In the correspondence which followed, from 1950 to 1962, the reader will witness their profound understanding, their particular interests, often shared, their vivacious exchanges bearing essentially on books, those they wrote and those they read. Their letters are exciting to read and are also a passionate tribute to pure literature. How apt for Miller to have found the expression 'a living book', and to have applied this to John Cowper Powys, for it is an expression that could also easily refer to Henry Miller himself.

In March 1950, Henry Miller, then living in Big Sur, CA, “poor in pocket” though the author of several famous books, introduced himself to John Cowper Powys in Wales: “I suddenly thought of you and the very great  influence you had upon me years ago, when I was just a lad ... I read everything of yours I could lay hands on”. Miller asked Powys if  there was anything he could send him from across the ocean. The older writer, delighted to receive this fan letter, replied graciously, “any books of yours, for though I have been snatching at fragments of your work for years & years I don't possess one single book”.

Thus a pen-palship was born, which lasted till Powys's death in 1963. The book Miller sent was not one of the Tropics, or Nexus, Sexus or Plexus — the content of which he feared might alarm the elderly Englishman — but an anthology of milder writings, Sunday After the War. Powys enjoyed them: “I tell my friends over here & my brothers and sisters that my new friend is an Atlantean Heathen Primitive like myself.”

Judging by the letters contained in Proteus and the Magician, a 160-page collection of the two authors' correspondence, Powys might have preferred something stronger. It was not the alleged friend Miller who was eager to introduce sexual topics into the letters, but the Glastonbury romancer. He did so in an un-Tropic-like manner:

For all my instinctive sex-vices my inherent sadism & masochism & spiritual & mental homo-sexuality (which is a weird sort of twice inverted Lesbianism when I really examine it) are vices that could easily exist in an extremely fastidious old maid . . . .

Powys contrasted his old maidishness with his correspondent's "possession of . . . nerves blood marrow flesh skin & magnetism — these overtones & undertones of 'love' . . .". He signed off, "your old Auntie John o' Dreams".

Miller stuck to old-fashioned courtesies ("I am still just a mere lad, in writing to you"). Instead of taking the hint and mailing one of what Powys called his "volcanic" works — all selling well in France but banned in Britain and the US — he recommended that Powys seek out The Spirit of Zen by Alan Watts. "There is more to it than tea ceremonies." The old maid wrote back that he was "a Mausoleum of Man-Woman Secrets". Miller suggested Siddhartha by Herman Hesse.

An unexpected actor in the drama is a young Londoner, Graham Ackroyd, who wrote audaciously to Powys: 'About the book I'm doing on Miller — it will contain letters —  so perhaps you will be kind enough to loan me any letters that Miller has written to you". Powys asked Miller what to do. With typical openness, Miller replied that while Ackroyd was not "ready" to write a book about him, Powys should let him have the letters anyway. A note tells us that Graham Ackroyd is the father of the novelist Peter and that the Miller book never got written.

A review by Lindsay Clarke in Resurgence.

“These days so much fiction is written in a spare, almost anorexic prose that it’s salutary to be reminded how once, and not so long ago, there were novelists who took delight in appealing to their readers’ senses as well as to the intellect by regaling them with a feast of language. Prominent among them were two brave writers, of different generations but kindred temperament, whose imaginations travelled far beyond the current vogue for ironical scepticism in their need to articulate a vision of cosmic range. Now the Powys Society has done us a valuable service by making available in English the full, generous-hearted correspondence between Henry Miller and John Cowper Powys.”