As previously, all are welcome either as contributors or as spectators. 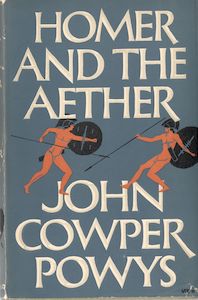 Powys retells the story of The Iliad, with occasional interventions by an “imaginary thought-reader, the immortal Aether,” to discuss the poet’s motives and intentions.... The Iliad is a study of war—the worst of man’s self-inflicted afflictions through the ages. Homer shows how the war, once started, stimulated the conflict of private passions, ambitions, and animosities in all sorts of different characters, till it spread far beyond the proportions of its origin and developed into a conflict among the gods themselves. Even Zeus, the greatest of the gods, was unwillingly implicated, though he surveyed the strife with pity and sardonic amusement at its futility.

As an exposition of one of the world's classics by an imaginative genius, Homer and the Aether is a masterpiece of interpretation. (From the Macdonald & Co 1959 blurb)

A meeting is planned at St Michael’s Parish Church Community Space, Church Lane, in Shirley village, Derbyshire, for Saturday 8 October, to celebrate, in the parish church where his father C.F. Powys was vicar between 1872 and 1879, the 150th anniversary of the birth of John Cowper Powys, at 1:15 pm on 8 October 1872.

See programme and photos of the day

We are delighted to announce that our first meeting in 2022 will be in-person. We are glad to be able to return to one of our favourite venues. All are welcome.

The event is free except for refreshments and optional lunch which may be taken in the restaurant.

If you would like to attend the meeting please notify Hon Secretary at chris.d.thomas@hotmail.co.uk

Wood and Stone was JCP’s first published novel and dedicated with the author’s “devoted admiration” to Thomas Hardy. The novel was published by Arnold Shaw in USA in 1915 and deals essentially with the relationship between two brothers James and Luke Anderson. In his high-sounding Preface JCP points to the main themes of the novel: the struggle between the “well-constituted” and the “ill-constituted”, the conflict between power and sacrifice, and between pride and love. These themes coalesce in Chapter 8 “The Mythology of Sacrifice”, and Chapter 9 “The Mythology of Power”. Here is JCP at a formative stage of his career as a novelist with all his faults, capability and potentiality.  The setting of the novel is the Somerset village of Nevilton overshadowed by two hills, Leo’s Hill and Nevilton Mount, which dominate the story with their elemental characteristics and their Christian and pagan resonances. Nevilton is recognisably Montacute. The two brothers are recognisably JCP and Llewelyn. In the novel JCP vividly evokes the locations of his childhood memory and the place from where his father used to point out to him Glastonbury Tor. But Nevilton is not envisioned here as some sylvan idyll from the past – there are dark forces at work. JCP declares Nevilton exudes an oppressive sense “of something depressing and deep and treacherous” which “lurks ever in the background.” At our conference this year we plan to visit Montacute and organise a guided walk to St Michael’s Hill, Hedgecock Woods and Ham Hill offering an opportunity to visit the scenes of Chapter 8 and Chapter 9 of Wood and Stone walking in the footsteps of the Reverend Hugh Clavering.

Members may wish to read reports of a previous discussion of Wood and Stone, on the occasion of its centenary year, in Newsletter 85, July 2015. Wood and Stone was reprinted by Village Press in 1974. A digitised copy can also be found online at the Internet Archive

Historic maps of the Montacute area dating from the early 1900s, which enable a closer identification of scenes in the novel, can be found online at the National Library of Scotland.