These six chapters, which were cut from the original edition of Wolf Solent, have never appeared in print. They have been published by the Society in July 2021 as a special suppplement to The Powys Journal Volume XXXI, which is distributed free to all members of the Society, and available on JSTOR. 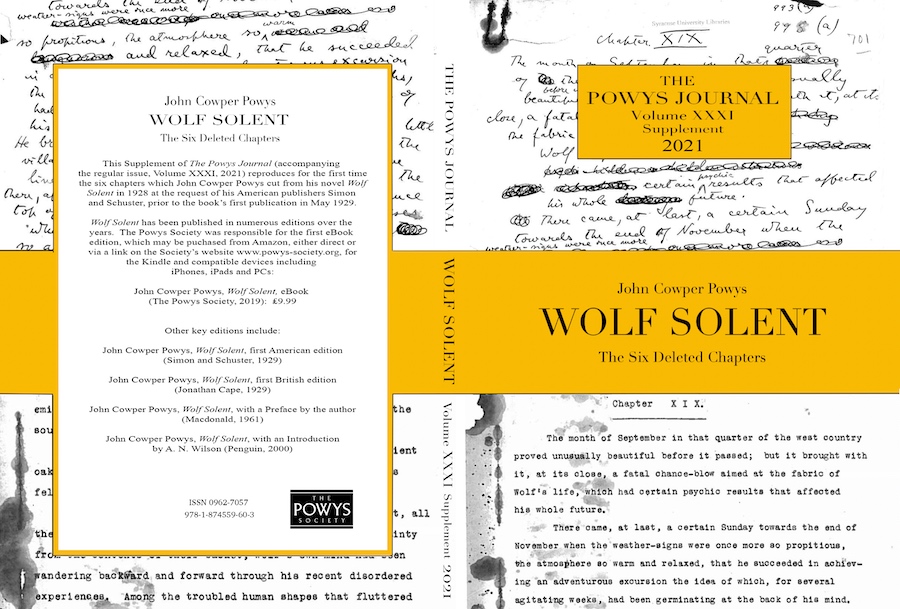 On 15 July 1928 John Cowper Powys’ prospective publisher Max Schuster wrote to him, “I think that the power and beauty of the book & the cumulative effect will be measurably enhanced by reducing it to something like 175,000 or 200,000 words”. Powys, desperate for money, rapidly deleted (with the help of Phyllis Playter) 89,000 words from the first draft of the novel that would become Wolf Solent: six whole chapters were condensed into one (Ch 19, ‘Wine’: 19,250 words in the novel as published). In the process we lost a quantity of fine creative writing that has never until now been published. Consider the following description of Wolf’s delightfully quirky solipsism:

As he walked he was still conscious that various passers-by stared at him with a quizzical hostility. He had noticed this phenomenon before and it always seemed to occur when his mind was agitated and his nerve jangled. One young man … a butcher’s boy or some other tradesman’s assistant … gave him a look of such impudent derision that he completely lost control of himself. As he met the youth’s eyes, he opened his mouth as wide as he could stretch it, and walked past the astonished young man with the air of a gaping imbecile.

It was not the first time that he had followed this method; but on this occasion he almost dislocated his jaw. His visage must have resembled one of those traditional classic masks of antique tragedy. “There’s your money’s worth!” he said to himself as he moved on.

On 27 November 2021 we will have a chance to discuss for the first time a number of passages of this nature, reluctantly deleted by JCP from his first draft of Wolf Solent, which never saw the light of day until their publication in The Powys Journal in the summer of 2021.

Tuesday 21 September 2021 — Zoom Discussion of JCP’s Up and Out: A Mystery Tale by the Reading Powyses Facebook Group

As previously, all are welcome either as contributors or as spectators. 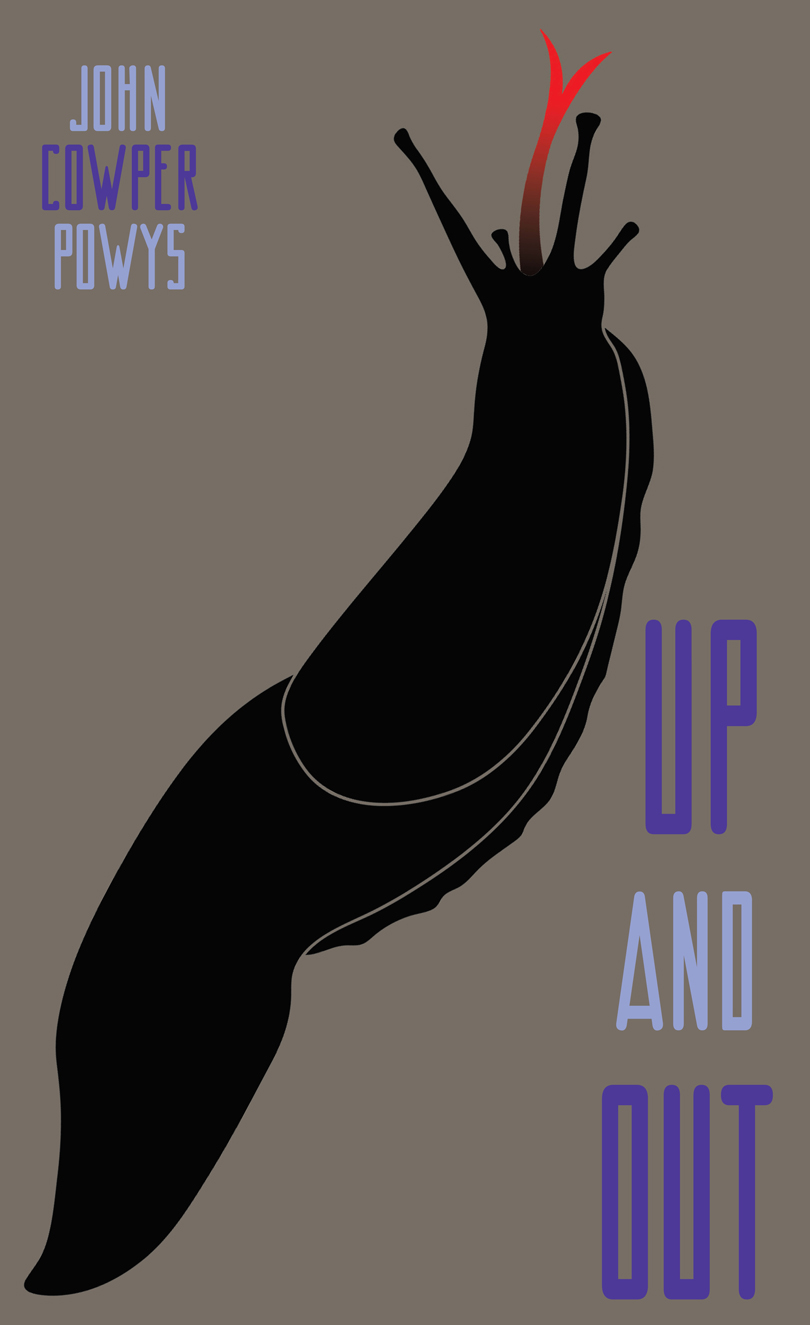 Available in a new edition from Zephyr Books (2020):
See Kate Kavanagh’s review in NL103 (July 2021)
In this novella, first published in 1957, a young couple, Gor Goginog and Rhitha, experience the great dual atomic explosion which ends the world, and smashes the planet to smithereens.

Cast into space on the last tiny green scrap of the Earth’s surface, they encounter the only other remaining beings from the dead planet, a couple blown up to their scrap by the force of the blast. Org is a composite creature, created by vivisectionists - part walrus, part fish, part bird - in fact made of a huge number of different animals’ body parts. With him is his partner, Asm, who is human like Gor and Rhitha.

As Gor, Rhitha, Org and Asm spin on through space, they philosophize about the catastrophe which has taken place, and encounter a Time-monster in the shape of a huge forked-tongued slug, through whose body they are pulled to the ultimate Void beyond. There they discover the utter abjectness of Eternity, and watch it swallow itself.

In the empty grey space beyond Time, they are visited by Mathonwy, the star Aldebaran, Kwangtse, Buddha, and some Greek gods arguing in a cloud, everyone discussing all the while, building revelation upon revelation, as the realisation dawns that the whole universe wants to kill itself! Finally, in a tumultuous capstone section, God and the Devil are their culminating visitors, in a conversation with the four which sometimes seems augustly impressive, sometimes a delightfully funny and petty argumentative chat. They all six come to a momentous decision together, which will change everything.

By the 1950s, John Cowper Powys had lived a very long life packed full of philosophical speculation. His thoughts had ranged far and wide, examining many of the world’s systems of thought and religious understandings. His extraordinary primary powers had engendered a way of marshalling them all, in profound relation to each other, and in relation to himself. Now, in his old age, he was inspired to begin on a short fantastical eschatological work which encompassed these ideas. The result, Up and Out, is one of the most eccentrically original pieces of fiction ever written. 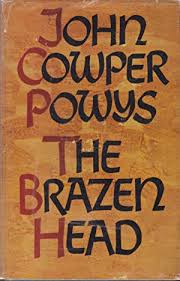 The Annual General Meeting was convened as a Zoom video meeting.

If any member wishes to join the Zoom discussion, please e-mail Kevin Taylor at kjt8422@gmail.com. Kevin will be hosting the meeting and will send you joining details in due course.

These letters (there are over 200) from JCP to his younger sister Philippa or Katie (1886-1963) cover a period of 50 years from 1911 to 1961 and provide a good introduction to the personal style of JCP’s voluminous correspondence. The letters range over a wide variety of subjects from family and friends, to favourite books and writers (especially Whitman), as well as JCP’s early experiences in America, his life in Wales, his daily walks, his progress with his own writing. They also give a vivid sense of JCP's deep sympathy with his sister’s personal difficulties. The editor of the letters, Anthony Head notes:

In Philippa, Powys had an ideal correspondent, someone open to all avenues of thought, whose responses to the life of the senses and the spirit were, like her brother’s, not subject to the restrictions of a certain religious dogma or metaphysical creed. Of all the Powys brothers and sisters, in many ways, as John Cowper liked to claim to her, they two were most alike.

‘Never has Mr Powys used his own infectious delight in narrative to better effect. The range historical, theological and magical interest is vast, but the treatment lucid and carried off with the engaging simplicity of a fairy story. A book of wisdom and wonders’.

The Reading Powyses Facebook Group is open to all who wish to join. We are proceeding through the novels of John Cowper Powys in sequence, enjoying the company of fellow enthusiasts. Since the introduction of Zoom all society members are warmly invited to take part.

Saturday 24 April 2021 — Discussion of T.F. Powys’ Fables, The Seaweed and the Cuckoo Clock and John Pardy and the Waves.

Although he will not be free on the day, we approached our former chair John Williams as our go-to T.F. Powys aficionado, on whom he has given several well-received talks to the Society in the past. John has provided a discussion document which gives us a starting point for the discussion. He invites (without prescribing!) background reading of poems by Blake, Gray, and Wordsworth as parallel texts that open up interpretation of TFP’s enigmatic fables. His document provides all the necessary passages from these poems. 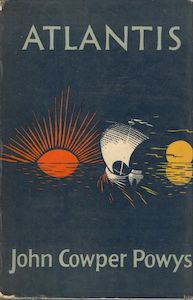 As previously, all are welcome either as contributors or as spectators to our talk about Atlantis, JCP’s 1954 novel that develops the character of Odysseus.

“There is something of Rabelais and Dostoievsky in the hilarity and nervousness of this weird book.” — Stevie Smith, Observer

Will we agree ? Available in Faber Finds and through Abe and other used book suppliers.