A Discussion Led by David Goodway

Celebrating the life, work and philosophy of Llewelyn Powys

Due to THE SAILOR’S RETURN at East Chaldon being closed each Monday and Tuesday lunch times, and thus will not be available for our members when they gather for the annual Llewelyn Birthday Walk on Monday August 13th, we have decided to meet instead at the RED LION at Winfrith at 12 noon for the annual toast to Llewelyn's memory and some lunch.

Then to gather at The Sailor's Return in East Chaldon at 1.30pm for a reading prior to commencing the annual Birthday Walk to Llewelyn's Stone. 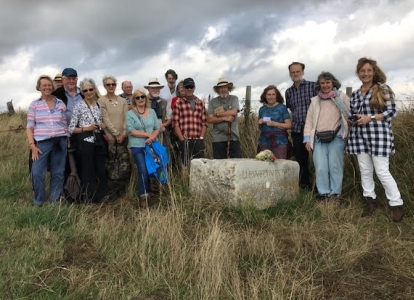 11.00am The Powyses and Patchin Place, New York, An illustrated talk by Ray Crozier 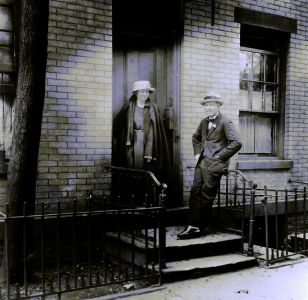 Ray will look at JCP’s relationships with Phyllis, Llewelyn, Alyse Gregory, and Gamel Woolsey during his five year residence at Patchin Place as well as the wider historical background of this locality of New York, including the social and cultural context of Patchin Place, its place in the history of New York bohemian artistic and literary life in the 1920s, and its significance in JCP’s biography as a place of refuge and retreat for writing. Ray will also refer to other neighbours, writers, friends, colleagues and relatives who either made visits to the Powyses or were residents there. There are memorable descriptions of Patchin Place in JCP’s Autobiography, An Englishman Upstate, Farewell to America, JCP’s letters to Phyllis and Llewelyn and in his short story The Owl, the Duck, and Miss Rowe, Miss Rowe! Members may also wish to consult a useful booklet in the Powys Heritage series published by Cecil Woolf in 2002, called We Lived in Patchin Place by Boyne Grainger, edited by Tony Head. See also Patrick Quigley’s article on Patchin Place in la lettre powysienne, No.19, printemps 2010.

2.00pm First Impressions A Parallel Reading of two short stories: Nor Iron Bars by T. F. Powys and A Friend in Need by W. Somerset Maugham: A talk by John Williams

“We may also discover that Powys and Maugham have more in common than we might first have thought.”

John Williams asks “Have you ever been caught out (for better or for worse) by discovering that your first impression of someone was ill-informed?” He says that “Nor Iron Bars and A Friend in Need are very different stories by two very different kinds of writer. What these stories have in common is the way they set out to surprise us with unexpected and thought-provoking aspects of the characters of their major protagonists, Joseph Turvey (TFP) and Edward Hyde Burton (Somerset Maugham). By sharing our responses to these stories we will be able to appreciate ways in which both writers are masters of the genre. We may also discover that Powys and Maugham have more in common than we might first have thought. Although you may end up with a preference for one or other of these stories, the intention is not to decide which is best, they are too different for that to be helpful!” TFP’s story Nor Iron Bars was first published in the collection called The House with the Echo in 1928. Somerset Maugham’s story has a more complicated history. It was written under the title A Friend in Need in 1924 and published in Hearst’s International Magazine combined with Cosmopolitan in April 1925 (USA) and in Nash’s Magazine (UK) in August 1925 under the title The Man Who Wouldn’t Hurt a Fly. It subsequently appeared in book form in a collection of magazine stories called Cosmopolitans in 1936 under the original title of A Friend in Need. John has compiled a list of subjects for discussion at the meeting. If you would like a copy of this list please notify Hon Secretary who will also send you a pdf file of each story. A Friend in Need is widely available in the Collected Short Stories of Somerset Maugham, Vol. 2, published by Vintage. John Williams was Professor of literary studies at the University of Greenwich from 2006 until his recent retirement. He has published numerous articles on TFP which have appeared in past issues of the Newsletter, the Powys Review and the Powys Journal. John has also written a biography of Wordsworth as well as books on English poetry. He presented talks on TFP at our conferences in 1995 and 2004 and led a TFP study day in Dorchester in 2005. John was editor of the Powys Journal between 1997 and 1999 and was Chairman of the Powys Society in 2000/2001.

28 April 2018: Aspects of A Glastonbury Romance — A Discussion led by Kevin Taylor

Committee member Kevin Taylor will lead a discussion of A Glastonbury Romance, Chapter 15, Mark’s Court, as well as a discussion of the character of Cordelia as she appears, in selected passages, throughout the novel.

According to his diary JCP commenced writing Chapter 15 of A Glastonbury Romance in early January 1931: “Wrote my Mark’s Moor Court chapter about Mr Geard in Merlin’s chamber and Lady Rachel and all. This is because the T.T. required a certain element of Romance which so far had not appeared among the solid bourgeois characters of this book!” (diary, 7 January 1931). This is one of JCP’s “clue” chapters providing some deep insights into Mr Geard’s complex identity and his unorthodox Christian beliefs. The chapter, which is set on Easter Day, has been called, by one critic, “one of the great climaxes of the book”. Our President, Glen Cavaliero, has also described Mr Geard as “one of JCP’s supreme creations”. This is a judgement which is perfectly demonstrated in this chapter. It is also a chapter which also demonstrates JCP’s genius for comedy and irony. Our discussion will give us an opportunity to look in detail at JCP’s ability to evoke the shifting margins of human consciousness, through an analysis of the figure of Mr Geard, and how this effects his character’s perceptions of the world. We will examine the significance of Mr Geard’s apparent encounter with the supernatural, the meaning of his “Christ supported nature”, his powers of psychic projection, his double nature - he blesses the unquiet spirit in the haunted room of King Mark: “Christ have mercy on you”, yet JCP also refers to the “diabolic intensity of his dark eyes”; we will examine Mr Geard’s sudden sense of illumination and his recognition of the Grail which occurs at the conclusion of the chapter. We will also look at how JCP realises his intention for Mr Geard as outlined in his diary: “Mr Geard must think of the secret of real life beyond the spectacular world.” Other diary entries in early January 1931(see the complete diary published by Jeffrey Kwintner in 1990) provide some very useful references to the evolution of JCP’s ideas about Mr Geard. In our discussion of Cordelia as a character, we will examine some selected passages about Cordelia throughout the whole book, referring to JCP’s psychological insights into her personality, focusing, for instance, on Chapter 7, Carbonek, in the scene on Chalice Hill and at the great oaks; on Chapter 25, Conspiracy, in the scene of Cordelia’s marriage to Owen Evans where she overhears the murder plot discussed in the ruined chantry; and Chapter 29, The Iron Bar, in the scene in which she exorcises a worm.