‘Where the spirit breathes’

In 1909, Mrs Rodolph Stawell, made a journey, by car, through Wales at a time when there must have been very few other motorists. She described Llangollen in her book, Motor Tours in Wales: ‘a little town that owes its charm entirely to its position...it is an entrancing place.’ In the eighteenth century the English naturalist, William Bingley, also toured Wales, and observed the view of Llangollen from a distance ‘with its church and elegant bridge romantically embosomed in mountains.’ When JCP arrived in Llangollen in May 1935, on the way to his new home in Corwen, he was at first unimpressed. He wrote in his diary that he thought Llangollen was: ‘a grievous disappointment...we shall not return.’ However on that first visit he was also very much impressed by the river Dee and instantly remembered, appropriately, a line from Milton’s Lycidas, 'where Deva spreads her wizard stream'. He stared, transfixed, at the ruins of Dinas Bran and prayed for the soul of Owen Glendower. JCP’s veneration for the subject of his new novel, which he was already thinking about, connects with a fragment of verse by Shelley: ‘Great Spirit whom the sea of boundless thought nurtures within its imagined caves...’ Of course JCP did return to Llangollen many times. He loved the town and its surroundings reversing his original impression. For this year’s conference we also return to Llangollen and the friendly hospitality of the Hand Hotel in its picturesque position overlooking the Dee. Famous guests who have stayed here, in the past, have included Darwin, Wordsworth, Browning, Scott and Shaw. (To be continued...)

The aim of the symposium was to identify potential for wider study of the books and documents in the Powys Society collection, present current research at Exeter University into writing about the south west region of England and show how analysis of original archival material can help broaden our understanding and appreciation of authors and their literary works. This one day symposium focused on the rich resources of the literary archives of the Heritage Collections at Exeter University where the Powys Society collection is now held.

Introduced by Christine Flaunch the Head of the Heritage Collection who made available a comprehensive display from the archive. Weighted and nestling on cushions were books, letters, manuscripts and documents from all the brothers along with wood engravings and related publications there for us to leaf over. And how wonderful that was to read whilst experiencing the texture of the paper and colour of the ink. For visual pleasure we delighted in the letters written by JCP on engraved hotel note paper sent whilst on lecture tours in America.

Michael Kowalewski gave a comprehensive introduction outlining the very good reasons for studying the Powyses. He expressed how saddened he is by the neglect of this family of high achievers. He talked affectionately about TFP and eulogised about JCP’s ‘grand sweep of cosmic consciousness’ and his ability to seamlessly move from the everyday through nature to the cosmic and to the internal mythology of the characters. He read a passage from Wolf Solent.

Dr Luke Thompson, published author of the unusual life of Jack Clemo described Clemo's relationship with T.F. Powys. He made a sensationalist description of Clemo as syphilitic which gave the impression that he was debauched rather than suffering from the congenital condition. In fact Clemo was deeply Christian with an extraordinary will. His relationship with T F, Thompson thought, was based on his admiration, respect and longing for TF to be the father he never had.

Dr Chris Campbell grew up in Weymouth. Ideally placed to know the town intimately his paper on Weymouth Sands looked at the industrial underpinning of Portland stone. Explaining the ecological and economic changes that are charted by the lives of the characters in WS. He discussed WS as a localised optic to the commodity frontiers that operates worldwide. A very interesting and novel theoretical approach to the investigation of WS illustrating JCP’s political awareness and the subtle way that it appears in his work. 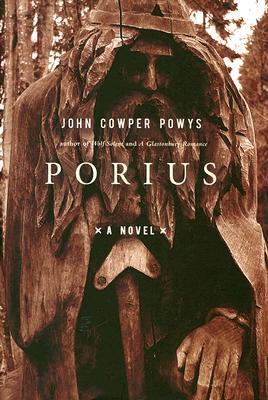 John Hodgson will lead a discussion of two chapters from JCP’s novel Porius: Chapter III The Stranger and Chapter XV Myrddin Wyllt. Both chapters provide a good opportunity to explore JCP’s conception of the deep and elusive character of Merlin. For background reading members may wish to consult a useful essay by Mark Patterson, ‘The Origin of John Cowper Powys’s Myrddin Wyllt’ in the Powys Review, No.25, 1990; also see JCP’s own comments on his ideas about Merlin in his notes on the characters of Porius published in Powys Newsletter, No.4, 1974-1975 (Colgate University Press); and JCP’s letters to Norman Denny at the Bodley Head, in 1949 and 1950, which include references to the role of Merlin in Porius, published in Powys Notes, Fall and Winter 1992. Nikolay Tolstoy sympathetically discusses JCP’s interpretation of Merlin in his The Quest for Merlin (1985).