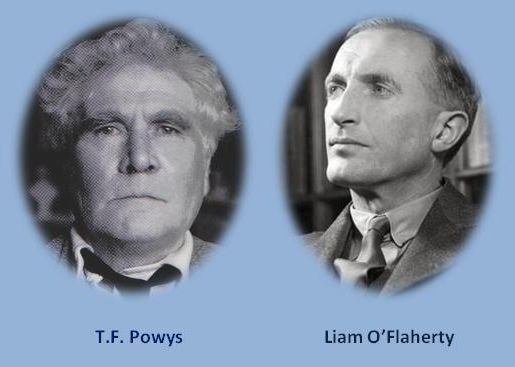 Pat Quigley will present a talk on the relationship between T.F. Powys, the Irish writer Liam O’Flaherty, (1896-1984), and the group of writers associated with Charles Lahr (TFP’s favourite bookseller) and David Garnett.

Liam O’Flaherty was a novelist and short story writer, with strong socialist beliefs, who in 1923, at the beginning of his writing career, escaped from the authorities in Ireland, travelled to England, toured Dorset and visited TFP at East Chaldon where, according to Judith Stinton, in Chaldon Herring: Writers in a Dorset Landscape (1988 / 2004), he camped ‘in a tent in a damp spot at the back of the old vicarage’. Here he began to write his most famous novel The Informer, published in 1925, which was later made into a successful film, directed by John Ford, in 1935, with a screenplay by Dudley Nichols. O’Flaherty was a keen admirer of TFP’s books and in 1925 he published a review, in The Irish Statesman, of Mr. Tasker’s Gods, in which he called TFP ‘a genius’, and praised the novel very highly. While staying at East Chaldon, Liam O’Flaherty had many discussions with Theodore. In a letter he wrote: ‘I have seen Powys and he looks awfully nice.’ TFP also favourably mentioned Liam O’Flaherty in a letter to David Garnett (now in the Powys Society Collection). In 1923 Gertrude Powys painted a portrait of O’Flaherty.

Pat Quigley, who is a member of the Powys Society, has previously given talks to audiences in Ireland about JCP. He is a retired public servant and the author of The Polish Irishman (2012) and Sisters Against the Empire (2016) on the Marcievitz connection and the 1916 Rising.

Celebrating the life, work and philosophy of Llewelyn Powys

The Dandelion Fellowship gather annually on Llewelyn's birthday at the Sailor's Return at East Chaldon in honour of his memory and according to the terms of his Will, and after raising a glass to Llewelyn those assembled walk up to his memorial stone where his last remains are interred high on the downs overlooking the channel and here a posy of his wedding flowers consisting of dandelions, ground-ivy and yarrow are placed and a reading from his work is given.

The gathering is at 12 noon and the walk commences after lunch, around 1.30 to 2pm. Walk about two and a quarter miles, mostly uphill - but downhill on the way back!

Including guest speakers Angelika Reichmann, Paul Cheshire and Peter Foss. Also, novelist Lindsay Clarke (The Chymical Wedding), who will present a talk on JCP's Porius, and Frank Wintle who will introduce the screening of a documentary film he made in 1986 for South West TV about the complicated relationship between Frances Gregg (JCP’s greatest love before he met Phyllis Playter), the poet H.D. (Hilda Doolittle), Ezra Pound, Louis Wilkinson and JCP, including the discovery, in strange circumstances, of Pound’s original manuscript of poems dedicated to H.D. (written to H.D. in the romantic manner of Swinburne, William Morris and Dante Gabriel Rossetti in 1905 before he began experimenting with modernism).

Michael Kowalewski, the Society’s Collection Liaison Officer, will present an informal talk and lead a discussion on the theme of T.F.Powys’s religious and metaphysical ideas illustrated by an examination of passages from An Interpretation of Genesis, Father Adam and other works by TFP. In his talk Michael will explore TFP’s original ideas about religion, his visionary fantasies and religious symbolism, his dualist beliefs, love of the Bible, his mysticism, pantheism, and antinomianism. A.E. Waite, the occultist, in a discussion of TFP’s religious unorthodoxy, referred to his paradoxes, contradictions, as well as his reverence, sense of immanence and his ability to produce “brilliant epigrams”.

AN INTERPRETATION OF GENESIS, written in an archaic biblical style in the form of a dialogue, was TFP’s first published work, privately printed in 1908 with the help of Louis Wilkinson and JCP, and distributed by William Rider & Son, but was also later reprinted by Chatto and Windus in 1929. On its first publication the book was favourably reviewed in Aleister Crowley’s magazine, Equinox, in March 1910, which noted the influence of the Kabbalah and dualism and stated: “This is a most mystical interpretation of the most beautiful of the books of the Old Testament... It is a little volume which one who reads will grow fond of, and will carry about with him, and open at random in quiet places, in the woods and under the stars...”

FATHER ADAM was written in 1919 but remained unpublished during TFP’s lifetime. It did not appear until 1990 in a modern edition. In Powys Notes, Fall 1990, Anne Barbaeu Gardiner reviewed the novel and called it “a theological novel and will attract the sort of reader who would enjoy Bunyan’s Pilgrim’s Progress.”  A useful guide to the many levels of meaning and reference in Father Adam can be found in an article by L. R. Leavis, T.F.Powys in Perspective, the significance of Father Adam in the Powys Review, Nos. 29/30.

'Father Adam by T. F. Powys, edited by Ian Robinson. (The Brynmill Press Ltd, £8.40)—delightfully produced edition of Powys’s first mature tale which is a must for anyone interested in the mordant and yet sympathetically ironic vision of the English rural scene. The tragedy of innocence in the preacher of the Ten Commandments, Father Adam, looks forward to the story, “The Box of Sweets”, and the overwhelming vision of Ralph Crew, a young man who believes his calling to be “that of reforming and regenerating the people of the whole world”, is an early suggestion of Powys’s bleakly comic masterpiece, Mr Weston’s Good Wine.’ — The Use of English Vol. 54, No. 3

Sonia Lewis will lead a discussion of Maiden Castle, Chapter 5, 'The Scummy Pond'. MAIDEN CASTLE was first published in the USA in 1936 (the New York Times thought it was “bewildering because of its complete lack of movement”), and in the UK in 1937 (the TLS review said that it “moves within a realm of its own”). Our President, Glen Cavaliero, has called Maiden Castle JCP’s most “Lawrentian” novel and W.J. Keith called it “the work of a literary master” although “not a fully achieved novel”. The book was drastically cut by JCP’s American editor – “he’s a snipper not a slasher” said JCP. Maiden Castle did not appear in its original unabridged form until a new edition was published by the University of Wales Press, edited by Ian Hughes in 1990. The Daily Telegraph review of the new edition called the novel “extraordinary”. JCP began writing the story in August 1934 at Rat’s Barn, on the Dorset downs, on his return to the UK from America but he found it difficult to decide on the form the story should take. It was not until after he had moved to Dorchester on 8 October 1934 and started to rewrite the novel in January 1935 that he settled on the main setting in Dorchester itself reflecting his own daily routine and meetings with people. His working title for the Dorchester novel was now “Dud No-Man’s Girl”. Maiden Castle is particularly notable for its morbidity and obsession with death – Urien Quirm has “dead eyes”, he smells of mortality and is associated with a “corpse god”. 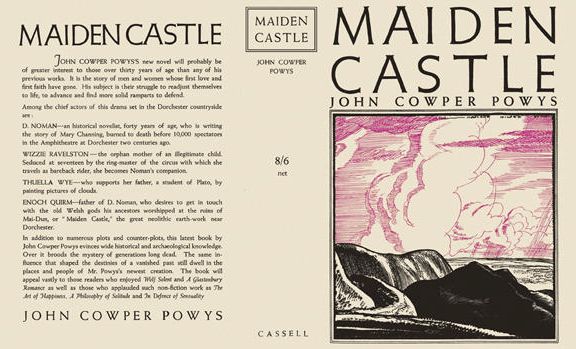 Maiden Castle is a very troubling novel much concerned with frustrated desire, tangled human relationships, the dark influence of family history and the ancient mythological past. But Maiden Castle is also remarkable for its wealth of realistic detail and especially naturalistic evocations. Chapter five begins with a portrait of Dud No Man’s domestic life in the flat he shares with Wizzie Ravelston in Friary Lane (a self portrait of JCP and Phyllis) and ends with an astonishing climactic scene on the approach to the ramparts of Maiden Castle, “the mystical city of Dunium”, where the ‘nameless bastard’s’ true identity and his relationship to the grotesque figure of Urien Quirm is revealed. In between these events JCP weaves his way leisurely examining the interrelationships of his characters, commenting on certain astrological influences – Dorchester is described as “a city under the sign of water”, and exploring the theme of the quest for identity, integrity and the search for inner meaning. There is comedy in the scene at the Antelope hotel and the literary luncheon hosted by Mr Comber. In the fully restored edition of the novel we may now also better appreciate JCP’s description of “the magic of flowers”. There is a good discussion of the significance of JCP’s description of cuckoo flowers in Chapter 5, in the scene set alongside the water meadows on the path to the blue bridge, in Harald Fawkner’s book, JCP & the Elements (Powys Press, 2015). The textual history of the novel has also been published in an article by Ian Hughes in Powys Review No.12, 1982/1983. The abandoned parts of the novel can be consulted at the Powys Collection at Exeter University and were printed in the Powys Review No. 15, 1984/1985. For an interesting personal response to the novel see W.J Keith’s article in la lettre Powysienne, No. 16, Autumn, 2008.