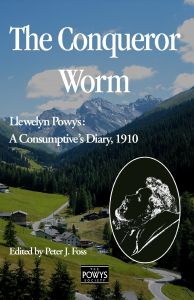 At the age of 25, the writer Llewelyn Powys(1884-1939), favourite brother of the novelist John Cowper Powys, contracted pulmonary tuberculosis, the killer disease of the age. Sent toa sanatorium at Clavadel near Davos Platz, he began in 1910 to keep a diary, over 48,000 words long which charted not only the insidious progress of the illness, and the treatments then in vogue, but also the cultural life of the high altitude ‘cure’, cut off from the world amidst a strange medley of characters, reminiscent of Thomas Mann’s The Magic Mountain. In periods between blood spitting, Powys read widely and intensively, formulating his life affirmative philosophy which was to permeate all he later wrote, from his vivid account of consumption in Skin for Skin (1925) to his ‘imaginitive autobiography, Love and Death (1939). This experience was augmented by the ‘dangerous liaisons’ he formed with young women, giving to the diary narrative an erotic frisson which reflects something of the nature of the illness itself. Powys received numerous letters while at Clavadel, from family and friends, many here quoted at length, making the diary an important untapped source of Powys material. The result is a kaleidoscope of impressions and anecdotes, bizarre encounters, and philosophical speculations which was considered at the time a work of literary art in its own right. Like Katherine Mansfield’s journal from the same period, Llewelyn Powys’s diary is a major record from inside the consumptive experience and adds significantly to our understanding of the ordeal of this deadly and durable disease in the first half of the twentieth century.

“An unfinished story written in 1912-13 that Foss includes at the end of The Conqueror Worm makes clear the lesson Powys took from his illness. The experience did not make him more prudent or in any conventional sense more moral. Instead it strengthened his resolve to enjoy life 'without restrictions'. 'If God restored me', Powys wrote, 'I thought I would live more eagerly, more wickedly than ever and with far more craft.' Recording a bold and original mind seeking and finding delight in life while facing the prospect of imminent death, this must surely be one of the most remarkable diaries that has been published in many years.”